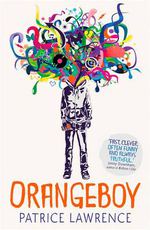 We have received 12 reviews of Orangeboy. You can add a review or scroll down to read reviews.

Patrice Lawrence was born in Brighton and brought up in an Italian-Trinidadian household. She made her way to East London in the 90s where she still lives with her family and cat. She has been writing for as long as she can remember. Orangeboy is her first novel.

Sixteen-year-old Marlon has made his mum a promise - he'll never follow his big brother, Andre, down the wrong path. So far, it's been easy, but when a date ends in tragedy, Marlon finds himself hunted. They're after the mysterious Mr Orange, and they're going to use Marlon to get to him. Marlon's out of choices - can he become the person he never wanted to be, to protect everyone he loves?

She loves music and can’t help making it a part of her writing. Her ideal mixtape includes drum 'n' bass, Bruce Springsteen and Studio Ghibli soundtracks.

She has a cat called Stormageddon.

I really enjoyed this book and I could not put it down! The characters and their backstory were very developed, detailed and interesting and it was a very different read to what I am used to.

Katarina gave Orangeboy 4 out of 5 and now plans to read Broken Sky by L. A. Weatherly.

Orangeboy managed to hook me in from the first chapter. It was one of those books which I couldn't put down once I started reading. I liked that it went straight into the plot and it didn't take too long for the plot to develop.

Aleksandra gave Orangeboy 3 out of 5 and now plans to read The Trap by Alan Gibbons.

I found that this book went on quite a bit longer than it should have been and I didn't really enjoy the story line. However I found that it was humorous at times which was good.

Cameron gave Orangeboy 3 out of 5 and now plans to read 13 Minutes by Sarah Pinborough.

I found this book a bit slow moving at the begining but about half way in got really interesting because there was a lot of action.

Chloe gave Orangeboy 4 out of 5 and now plans to read Broken Sky by L. A. Weatherly.

At the start it was very fast moving and then I found it hard to get into but, at the end it had me on the edge of my seat. I really think that the storyline was good as some teenagers can relate to Marlon.

Grace gave Orangeboy 4 out of 5 and now plans to read 13 Minutes by Sarah Pinborough.

At first, I was not entriged by this book, as it is not something I would usually read, but once I got into the story I quickly grew to love it. I think the plot was brilliant and I not only enjoyed myself whilst reading Orangeboy, I actually gained knowledge on the subjects of gangs and street crime and how they affect the people around you.

Anna gave Orangeboy 4 out of 5 and now plans to read The Trap by Alan Gibbons.

I read this book within three days and i didn't want it to end! The character who intrigued me the most was Marlon. Like the flick of a switch, his life had been turned around dramatically but this didn't stop him from continuing forward with his life. This book intricately explored the subject of gang violence and how it not only affects you, but the people you love as well. Overall I think this was an extraordinary book and I would love to read books like Orangeboy in the future.

Victoria gave Orangeboy 5 out of 5 and now plans to read Broken Sky by L. A. Weatherly.

Orangeboy is not a genre I would have usually read however after reading this book I would consider reading books of a similar genre again. The characters were brought to life through descriptive storytelling and I felt I learnt a lot about the subject of gang violence.

Una gave Orangeboy 4 out of 5 and now plans to read The Trap by Alan Gibbons.

'Orangeboy' is not the kind of book i would usually read but nevertheless i enjoyed it thoroughly.I liked the fact that the ending was completely unpredictable and delved deeper into the intricate subject of gang crime and its effects on family members and friends. You can sympathise with Marlon and want things to turn out right for him in the end. Overall, i enjoyed the book and would even consider rereading it!

Ka gave Orangeboy 4 out of 5 and now plans to read The Trap by Alan Gibbons.

I really enjoyed this book and couldn't stop reading it. Orangeboy was a thrilling and shocking book. It showed me that that there is more to gang life then what we hear about. The book made me feel different emotions like happiness when the trouble ended, excitement when you couldnt tell what was going to happen next and sad to know that young people could do such things. I could feel how marlon felt about breaking his promise to his mum so he could protect his family. I highly recommend this book to anyone my age or older

Megan gave Orangeboy 5 out of 5 and now plans to read 13 Minutes by Sarah Pinborough.

A great book exploring the taboo of the lifeâ€™s and beginnings of the gangsters who terrorize the streets and how it is not always their fault, it also shows how a boy is affected by the loss of another and attention from someone above his social status, I found I could relate to Marlon and see his panic of seeing his life deteriorate and a childhood friendâ€™s betrayal.

Arthur gave Orangeboy 3 out of 5 and now plans to read Broken Sky by L. A. Weatherly.

I thought this book was a really interesting book because I have never read anything on this kind of subject. It took me out of my comfort zone and I was really happy it did because now I know I can read lots of different books I wouldn't think to read. It made me feel amazed that people would do this kind of thing and it also made me feel really sad because he has to do things he doesn't want to for his family. It also made me feel angry towards one of the characters called d'ice because they were doing horrible things. I would definitely recommend this book. It twists and turns and I didn't expect what happened to happen.

Millie gave Orangeboy 4 out of 5 and now plans to read The Call by Peadar O'Guilin.