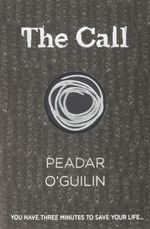 We have received 12 reviews of The Call. You can add a review or scroll down to read reviews.

Peadar Ó Guilín grew up in North West Ireland and after brief forays living in Milan and Venice, now lives just outside Dublin.  He has written plays, published short stories, and performed as a stand-up comedian. In 2007, Peadar published his first novel, The Inferior. His fantasy and science fiction short stories have appeared in numerous venues, including Black Gate magazine and an anthology celebrating the best of the iconic Weird Tales.

On her birthday, Nessa finds out the terrible truth about her home in Ireland – the truth that will change her future forever.

That she and her friends must train for the most dangerous three minutes of their lives: THE CALL.

That any day now, without warning, they will each wake in a terrifying land, alone and hunted, with a one in ten chance of returning alive.

And it is Nessa, more than anyone, who is going to need every ounce of the guts, wit, and sheer spirit she was born with, if she – and the nation – are to survive.

The Call was inspired by the beautiful northwest of Ireland where he grew up.

He is currently working on a sequel to it.

This book was great,quite grim so if your into the horror genre then this book is for you. At the end I couldn't put the book down.

Grace gave The Call 5 out of 5 and now plans to read Broken Sky by L. A. Weatherly.

This book was incredible; I couldn't put it down! I loved Nessa and how she earned the respect of those around her but hated Conor and Sergeant Taaft because they were so mean and nasty to Nessa. However I thought that Sergeant Taaft redeemed herself at the end

Phoebe gave The Call 5 out of 5 and now plans to read Broken Sky by L. A. Weatherly.

I enjoyed this book quite a lot. I found it quite confusing at first, but I got into it and enjoyed it. The plot is very good and it is written in an interesting and intriguing way. 4/5 stars.

Emily gave The Call 4 out of 5 and now plans to read Orangeboy by Patrice Lawrence.

I found The Call an interesting concept and I enjoyed the character development throughout the book. However, I thought this book contradicted itself many times on the rules of the universe it was set within. I found the ending rushed and very unenjoyable. It left a lot of loose-ends, especially with the other characters and the future of the world. Considering Nessa was a character who had been through a lot, it seemed unrealistic for her to end up in the place she did. The way she protected herself during The Call also felt unrealistic and rushed. Therefore, despite the interesting premise, the book as a whole was not to my liking.

Frankie gave The Call 1 out of 5 and now plans to read Orangeboy by Patrice Lawrence.

I thought that this book was very tense and chilling however I found that as a reader I was not given enough background about the story line therefore I only started to get into the book after a previous reader gave me information about the history of the setting. Once I had a good understanding of the story I thought it was written quite well and it had a really good ending and cliffhanger.

Tessa gave The Call 3 out of 5 and now plans to read Eden Summer by Liz Flanagan.

I really enjoyed this book because you slowly began to understand the horrific things that happened when they were called. It was impossible to put down. It was really well described and a bit scary but great for people that like being scared.

Chloe gave The Call 4 out of 5 and now plans to read Eden Summer by Liz Flanagan.

I thought The Call was fantastic! It was very different to anything I have ever read and was excellently written; it painted a vivid picture in my head but also left certain things blank so that I could imagine it myself. The characters had great individual personalities and were very well thought out - I particularly liked Megan! If there was a sequel I would definitely read it.

Katarina gave The Call 5 out of 5 and now plans to read 13 Minutes by Sarah Pinborough.

I think this book was amazing and chilling book. I though how dissmisef of nessa everyone was towards nessa was really annoying because it's just because she had something wrong with her legs. It was a really good book that I enjoyed

Millie gave The Call 5 out of 5 and now plans to read Broken Sky by L. A. Weatherly.

I really liked this book because it had an excellent story line. It ended on a bit of a cliffhanger which was quite exciting. I would love to find out what happens next with Anto and Nessa.

Ciara gave The Call 5 out of 5 and now plans to read 13 Minutes by Sarah Pinborough.

Amazing new idea, with tastes of adventure and fantasy throughout.

I related to the main character, Nessa, because even though she was dismissed and pitied by most of the other students and staff, she kept driving on to improve her chances of survival.

Arthur gave The Call 4 out of 5 and now plans to read Eden Summer by Liz Flanagan.

cameron gave The Call 4 out of 5 and now plans to read 13 Minutes by Sarah Pinborough.

This book was awesome! I found is very strange and grim in some places, however I was gripped by it instantly and couldn't put it down. The story line was brilliant and I was happy to find out that there will be a sequel to it as I want to find out what happens next.

Cameron gave The Call 5 out of 5 and now plans to read 13 Minutes by Sarah Pinborough.